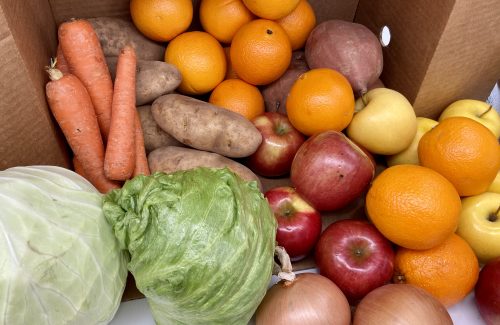 When the MARC first started, the Blue Ridge Area Food Bank was intrigued by the idea of being a member because they wanted to expand their produce program, the mixed load option, and the variety that they would have access to. Greg Knight, Food Sourcing Manager at Blue Ridge Area Food Bank explained, “When the MARC first came along, we were nervous, but we were also encouraged because the national network, Feeding Pennsylvania, and other partners were behind it. In the past, we’ve had partners attempt to do something similar with aggregating produce, but the quality was just really poor. With the MARC it was different, so we started out doing a truckload per week, which was about half of what we were bringing into the warehouse.”

As the food bank continued to work with the MARC, variety and customer service became the top benefits. The MARC allows the food bank to obtain a diverse range of product because of the proximity of the port and the accessible location.

Before working with the MARC, they received a variety of hard 7 items like apples, carrots, and potatoes, but now through their partnership they receive items that aren’t grown in the region and more perishable items that they can’t accept in large quantities. “For items like grapes, we could only order more than what we want to get at any one time, so being able to get a mixed load with 5 pallets of grapes, 10 pallets of potatoes, and a couple onions is fantastic because we aren’t able to handle the larger volumes,” explained Greg.

In addition to variety, Greg explained that their relationship with the MARC became a rhythm. “The team is always great to work with and very responsive and responsible with our funding, and we just feel like it’s a good stewardship vein for us.”

This partnership became even more important amidst the pandemic because of the introduction of the mixed box. Like many food banks, volunteers were hard to come by and agencies had to close or adjust their schedules. The prepacked box provided the Blue Ridge Area Food Bank the opportunity for a low touch, no touch option. “With the prepacked boxes, we could use less volunteers and utilize drive through distributions where we’d place the boxes in the client’s trunk allowing for limited contact for both the client and the agency volunteer. That has been a super important thing for us throughout our COVID response and favorable response from everybody involved.”

Specific to the COVID response, the Blue Ridge Area Food Bank worked with the MARC to source produce boxes for a special distribution for their Lynchburg branch. There was a need for a produce box with a longer shelf life due to the length of distribution. Because of this, the food bank chose to utilize the MARC’s premium boxes. “We knew the distribution would need an extra set of hands in the middle of the process which meant that it would likely be a couple more days before the box ended up in a client’s home, so we tried the premium boxes. It’s outside of our usual budget range for produce, but we found that it was perfect for the distribution because of the quality and gave us more confidence knowing that there wouldn’t be an excessive amount of decay or rotted product.”

Learn more about the MARC: https://www.feedingpa.org/our-programs/marc/